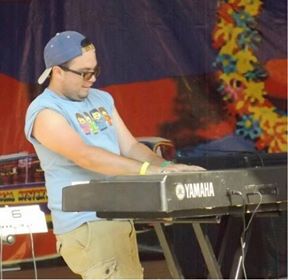 Patrick Fallon is a pianist from West Haven, CT At the age of 6, Pat had an immense curiosity about music, especially the piano. He began his musical career by teaching himself how to play his grandmother’s two-tier, 88-key Lowry Pageant Organ. From that humble beginning, Pat broadened his musical horizons in many different facets. With his knowledge of multiple instruments, Pat’s musical talent is not just limited to musical performance. Pat has had experience conducting large musical ensembles, serve as an assistant musical director & conductor for Stratford Academy’s musical production of My Fair Lady in 2007, and pit musician in West Haven High School’s production of The 25th Annual Putman County Spelling Bee in 2018. In addition, Pat has had experience arranging scores. Pat was a member of the Tri-M Music Honor Society at his high school alma mater, Notre Dame High School, and had received many awards and accolades over the years, including the Louis Armstrong Jazz Award for piano performance, the Connecticut Association of Schools Outstanding Arts Award, and the Salvatore Michael Amore ’78 Alumni Band Loyalty Award from Notre Dame High School.

Pat’s love for rock and roll is contagious! He has been with many bands playing at weddings, restaurants, and private events across Connecticut for more than a decade. Periodically, Pat fills in on keyboards for The Navels, a local band based out of West Haven. His philosophy for education is to inspire others and bring out the best in each and every one of his students. This is something Pat exemplifies everyday as an educator at West Haven High School. For piano instruction, Pat is classically trained and guides students in ear training and the fundamentals of music theory. His musical influences include Queen, The Beatles, Panic At The Disco, Green Day, Rogers & Hammerstein, Lerner & Loewe, Count Basie, Ludwig van Beethoven, Herbie Hancock, ELO, Emerson Lake & Palmer, John Williams, Ozzy Osbourne, Rachmaninoff, Gustav Holst, Igor Stravinsky, Aaron Copland, and so much more!